Here are the last units for the Blue Regiment. 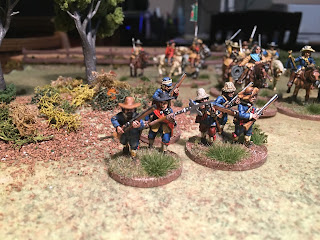 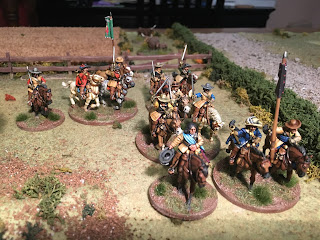 One unit of elite commanded shot and two units of gallopers.
Posted by Mark Stricker at 8:44 AM No comments:

First Army for The Pikemen's Lament

Here is my first army for The Pikemen's Lament.  These are Perry figures that I had painted years ago mostly by Dave Woodward of Every Victorious Miniatures.  I did paint up a few of the command figures.  The army has two units of gallopers, one pike, one shot, one commanded shot, and the falconet. 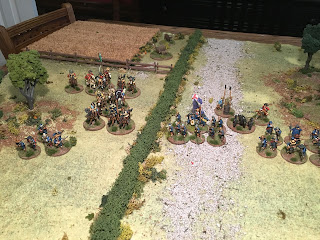 Here is a shot of the entire force. 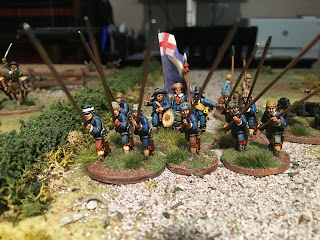 Here is the pike unit. 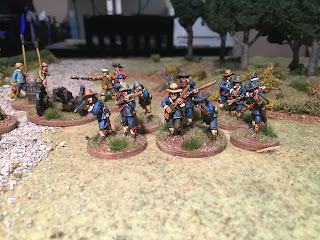 And the shot
Posted by Mark Stricker at 8:41 AM 3 comments:

Well, it has been a very long time since I posted anything.  I lot has happened in my life ... moved from Virginia to Texas, bought a new house, and changed jobs.  However, I'm ready to post a few things again.
My new home does not have much room for gaming, so I have downsized to a 3 by 4 gaming table. This is great for skirmish games.  I recently discovered the rules by Daniel Mersey.  He has done Lion Rampant, Dragon Rampant, and The Men Who Would Be Kings, plus others.  I have been playing games with his The Pikemen's Lament (TPL). These are a set of pike and shot rules for skirmish gaming. 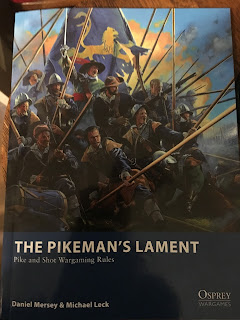 I had a lot of English Civil War miniatures on the shelf gathering dust.  I had painted up a few units, but I realized that I would never have enough figures to play a mass combat game like Warlord's Pike and Shotte.  Fortunately, TPL being a skirmish game, only takes a few figures.  You build you force using a point system, so you have lots of choices.  A typical army will have five or six units, with each unit have six or twelve figures.

Here is a unit of dragoons.  The figures are from the Perry range of 28mm figures with the exception of the dismounted horse, which is from Empress. 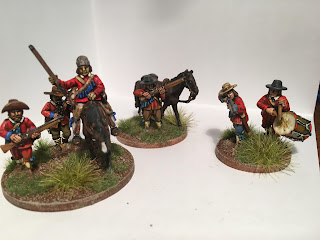 Posted by Mark Stricker at 4:08 PM No comments:


The spring and summer of 1862 had seen the Army of Northern Virginia defeat two powerful Union armies, one under McClellan in the Peninsular Campaign and one under Pope in the battles near Manassas in northern Virginia.  The defeated union forces had fled back to Washington and the security of its fortifications.  The victorious General Robert E. Lee was then faced with an important strategic decision … how he and his soldiers would maintain the initiative and set the stage for a Confederate victory in the war.
Lee and the Southern leadership agreed that the best course of action was for Confederate forces to carry the war north.  So Lee took his soldiers across the Potomac and for the first time since the commencement of the war nearly a year and half earlier, led a Confederate army onto Union soil.  However, almost from the start, things did not go as planned.  The Union garrison at Harper’s Ferry did not flee in the face of the advancing Confederates, but dug in and waited for battle.  Additionally, McClellan used his extraordinary administrative talents to quickly organize the demoralized Union forces near Washington into a renewed Army of the Potomac.  He then also moved to counter Lee’s invasion with uncharacteristic alacrity.
After crossing the Potomac River into Maryland north of Leesburg, Virginia, the Army of Northern Virginia continued north and occupied Frederick.  At this point, Lee divided his army with some troops marching to invest Harpers Ferry while others moved west across South Mountain toward Hagerstown … only D. H. Hill’s Division and some of Stuart’s cavalry were left to act as a rear guard.   Unfortunately for the Confederates, McClellan and the Army of the Potomac were now in pursuit, and the Union forces marched toward Frederick and South Mountain in multi-corps strength.
On September 14, pitched battles were fought for possession of the three main South Mountain passes: Crampton, Turner, and Fox Gaps.  By dusk the outnumbered Confederate defenders were driven back and McClellan was in position to destroy Lee’s army before it could concentrate.  However, McClellan’s limited activity on September 15 after his victory at South Mountain condemned the garrison at Harpers Ferry to capture and gave Lee time to unite his scattered divisions at Sharpsburg.

The Scenario
This scenario is designed for use with the Gettysburg Soldiers rules and covers the initial morning engagement fought at Fox Gap between Garland’s and parts of G. B. Anderson’s North Carolinian Brigades (both of D. H. Hill’s Division), and General Cox's Kanawha Division of the Union IX Corps.  Later scenarios will cover the afternoon action in the same area when both sides fed reinforcements into the fight.
The Terrain
This scenario requires a small playing area:  4’ x 3’.  Terrain should be laid out as shown in the scenario map.  Terrain effects for the scenario are as follows:
Woods.   The wooded areas are dense and rated rough terrain for movement (rule 17).  Shooting distances are limited to 6” (rule 37).  Targets in woods cause a -1 fire modifier because of the cover (rule 51).
Cornfields.  These areas represent mature standing stalks and are rated rough terrain for movement (rule 17).   Shooting distances are limited to 6” (rule 37).  Cornfields do not provide any cover.
Elevations.  Elevations have a continuous slope, from the lowest to the highest level marked by a crest line.  Elevations block line of sight for any stand over 1” beyond the crest line.  The defender in hand-to-hand melee receives a +1 modifier for favorable ground if the attacker charged up slope (rule 69).
Walls and Fences.  All walls and fences are obstacles for movement (rule 18) and do not block line of sight.  In fire combat the firing stands suffer a -1 modifier when firing at any target aligned behind a wood fence, and a -2 when firing at a target behind a stone wall (rule 51).  A defending unit aligned behind a stone wall in charge combat received a +1 modifier for defending favorable ground (rule 69).
Roads.  Only units in column, limbered artillery, or generals receive the 3” road movement bonus when moving along the Old Sharpsburg Road (rule 16).  All other roads are poor and the above units moving along them move at normal rates even through rough terrain.
Buildings. All  buildings are wood construction and are obstacles for movement (rule 20).  They have no effect on line of sight, but may be occupied by 1 stand of skirmishers. Targets in buildings cause a  -1 fire modifier because of the cover (rule 51).  Defenders in a building in hand-to-hand melee receive a +1 modifier for favorable ground (rule 69).

Well, I finally finished the Fox Gap scenario that covers the morning fight.  I did it for Regimental Fire and Fury and you can find it at the above link.

Thanks, Mark
Posted by Mark Stricker at 12:36 PM 8 comments:

I am in the process of designing a small scenario to use with the various US Civil War miniature gaming rules I want to try out.  It will cover the 14 September 1862 morning fight at Fox Gap between General Garland’s North Carolinian Brigade of the ANV and General Cox’s Kanawha Division of the Union IX Corps.  I have finished the research on the order-of-battle for the units involved and now need to develop the scenario game map.  I plan on doing it at a scale of 25 yards equals one inch (the scale used by Regimental Fire and Fury, Gettysburg Soldier, and other rules).

Yesterday turned out to be a beautiful day, with a high temperature of about 75 degrees and mostly clear skies.  So, because I live only about 90 minutes from the battlefield, I decided to take a field trip to South Mountain and get a firsthand look at the terrain.  Walking the actual ground gave me a better appreciation of the topography and will allow me to develop a more accurate scenario map.
The trip was very productive, so I thought I would share some pictures that I took.  If you would like to take you own trip to Fox Gap, the Friends of South Mountain State Battlefield web site has a walking tour of area.  You can find it here:
http://www.friendsofsouthmountain.org/foxsgaptrail.html
Also, before I get very far into this, I would like to make an appeal for your support of The Civil War Trust.  TCWT is America's largest non-profit organization (501-C3) devoted to the preservation of our nation's endangered Civil War battlefields.   The South Mountain Battlefield has been designated as one of our nations most endangered battlefields.
http://www.civilwar.org/battlefields/south-mountain.html
Additionally, if you are really interested in a detailed history of the Fox Gap area, then I would recommend you visit ‘A Gap in Time: The Wise Farmstead and Fox Gap Archeological Project’ at:
http://www.iuparchaeology.iup.edu/FoxGap/
Click on the link to the ‘Project Results’ and then the pdf under ‘II Place for the Past.’  It contains a detailed description of the battle at Fox Gap and includes some of the best battlefield maps I have ever seen.  These are by Steven R.  Stotelmyer, and I have keyed the photographs to one of his maps. 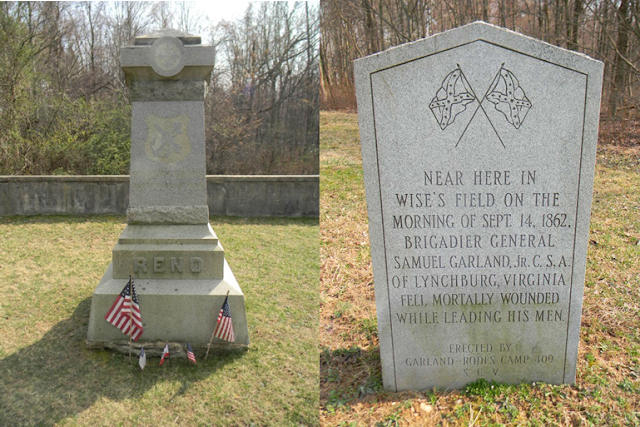 These pictures are of the Reno and Garland monuments which are located near the spot of the Wise cabin on the map.  By the way, the Wise house is no longer standing. 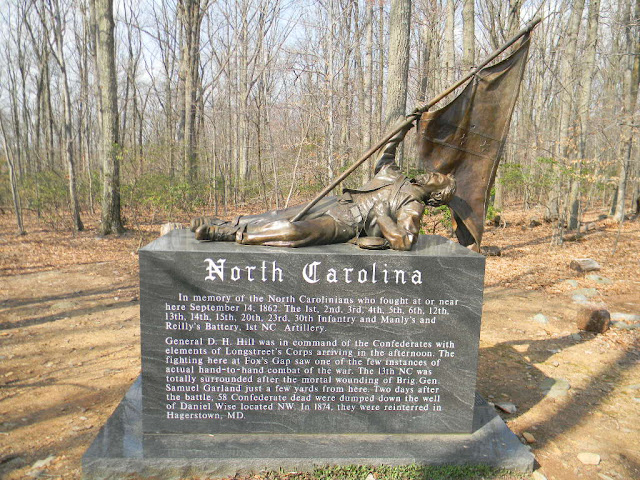 The North Carolina Monument is about 1000 feet south of the Reno Monument and was placed on the battlefield in 2003. 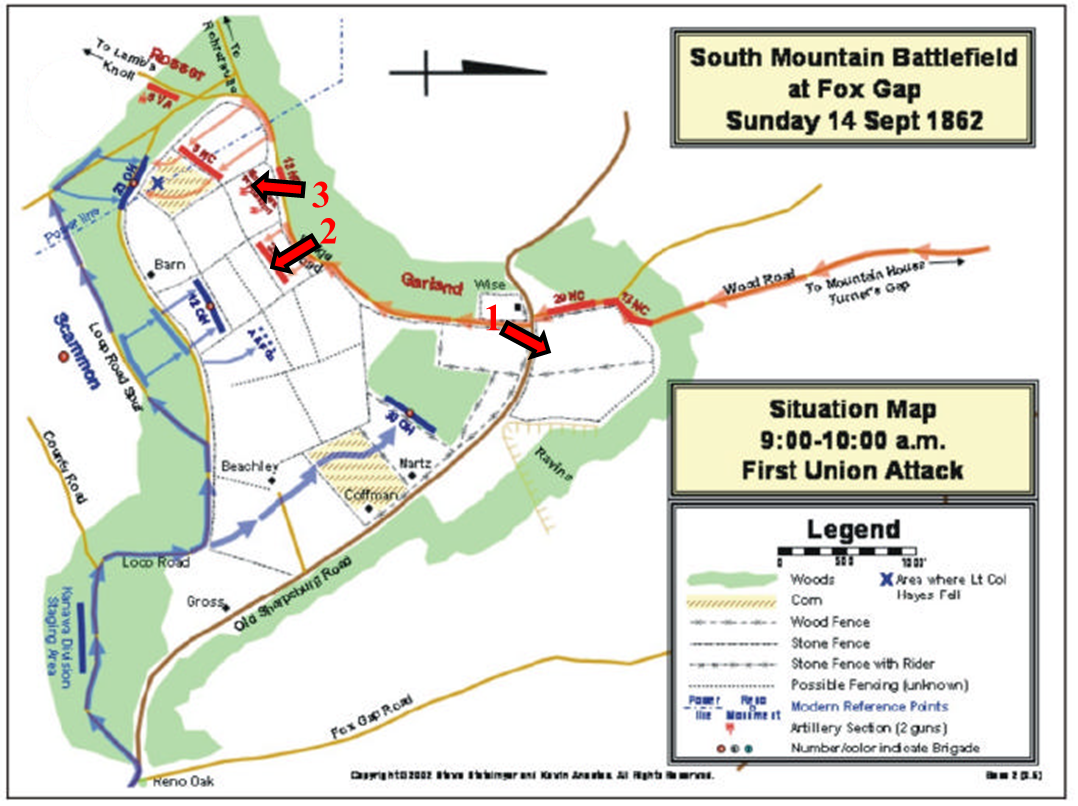 This is a picture looking north at “17th Michigan Field.”  The field is just north of the Wise cabin location and Reno Monument Road.  It gives you a good idea of the flat open areas in the Gap itself.  See map reference point one. 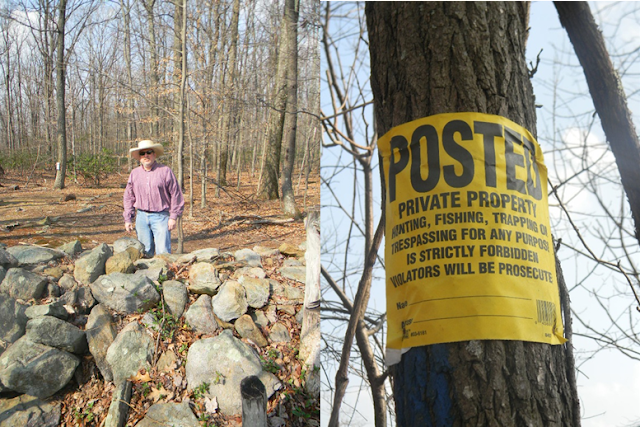 Many of the Civil War era stone fences are evident … just remember NOT to cross them and head off into the fields on the east side of South Mountain.  These fields are on private property and are not under National Park Service control. 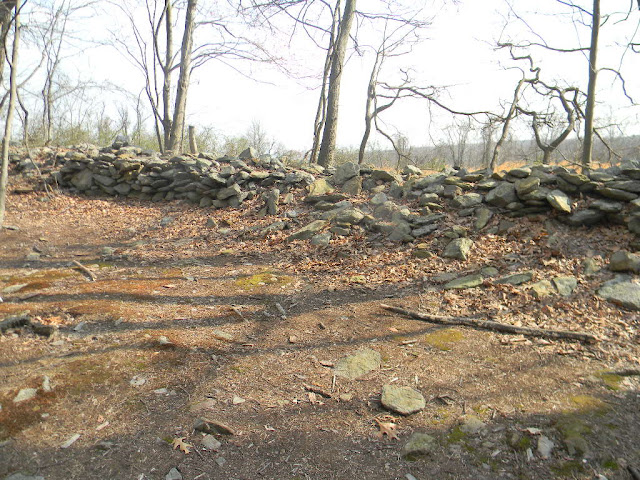 This is a view looking east from behind the stone fence that was used as a defensive position by Col. Daniel H. Christie’s 23rd NC Infantry Regiment.  See map reference point two for this picture and the next. 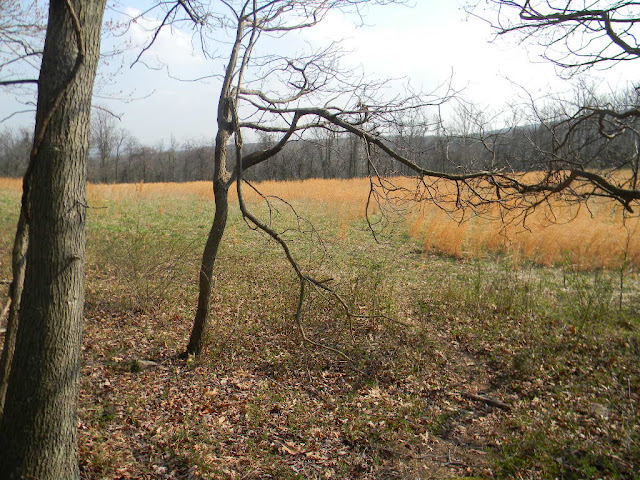 This view is from the wall itself and the defensive position of the 23rd NC,  looking east across the field that Col. Carr B. White’s 12th Ohio Infantry Regiment would have attacked across. 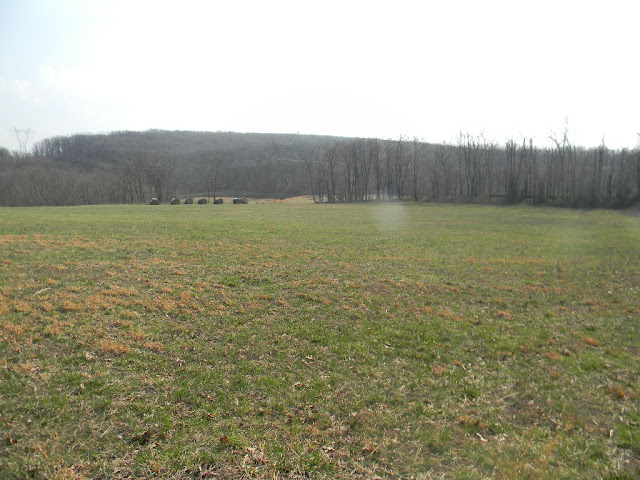 See map reference point three.  This is the view toward the southeast.  Captain Bondurant’s Jeff Davis Artillery Battery fired in support of the 5th NC Infantry Regiment from this spot.  LtCol Rutherford B. Hayes’ 23rd Ohio Infantry Regiment attacked from left to right across the ground in the distance.

I wanted to share the following chart with you.  It is a list of miniature wargame rules for simulating battles during the American Civil War.  Over the coming weeks I will review several of these rules, particularly the ones dealing with battles at the regimental level.  With a few exceptions, I only cover rules that are currently available.  The rules listed under the generic category are designed to cover 'black powder' warfare in general and are not specific to the US Civil War.  Also, if there is an asterisk next to the binding type, then the rules are available in soft-copy.